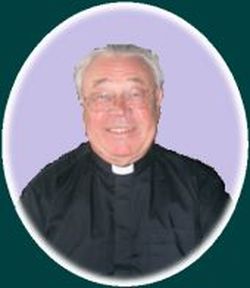 Life Journey
I was born in Hebburn within the borough of South Tyneside and completed my early primary and secondary education there before moving into the work place. I began an apprentiship  as a draughtsman with a Bushing Company and after a couple of years realised it wasn't for me and decided to leave.

Upon leaving the Company, I began training to become a priest in Osterlry and Oscott College and finally becoming ordained in 1964. Upon leaving the seminary, my first post was a curate between 1964 - 1967 in Hackenthorpe in Derbyshire. This gave me vast experience of working alongside experienced members of the clergy and prepared me for my next post as a Royal Navy Chaplain. I had this position for 22 years from 1968 - 1990 and was made Principal Chaplain in 1984. In this time I served in the Far East,  Gibralta,  Northern Ireland, Falklands and finally in the cold South of the globe - Antarctica.

In 1984 I was awarded an Honorary Prelate form His Holiness Pope John Paul II and in 1989 I was appointed a Commandor of the British Empire (CBE) by her Majesty Queen Elizabeth II.

Upon leaving the Navy I became the parish priest at Ss. Peter & Paul's RC Church in Longbenton before taking up the same post at St Bede's RC Church in Jarrow. Then in 2002, I retired from full-time priesthood and am now living in South Shields, back where I started in South Tyneside assisting the cluster when I can.

In my spare time I enjoy travelling around the country as well as special areas in the world as well as using my retirement time to visit friends.

Cluster Vision
My vision for the cluster of South Shields, Whitburn and Boldon is to unite all seperate Catholic parishes within the cluster area and to work together with better communication, co-operation and a clear vision as one Church through the teaching of Jesus Christ.
google-site-verification: google2163923776e94aff