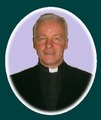 Life Journey
I was born at the General Hospital Newcastle on 4 April 1957 and was baptised in St Andrew’s Church in the centre of the city. My family moved to Longbenton in 1960 and I began my schooling at St Stephen’s Primary until 1968 when I answered an appeal by a Missionary Order to become a missionary. I entered their Junior Seminary at Romsey Hampshire at the age of 11 and remained there for only one year, I was home sick. I returned to Newcastle and continued by education at St Joseph’s Killingworth. At the age of 18 I again tried my vocation to the priesthood and was sent to Osterley in London in 1975 and then to Ushaw in 1977. I was ordained a priest on 1 July 1983.

I was appointed an assistant at St Joseph’s Hartlepool. I asked the bishop to let me help on the missions in Kenya but instead he asked me to become an Army Chaplain. In 1988 I went to train at Sandhurst and then spent two and a half years in Germany and six months in Iraq during the First Gulf War, 1990/91. I returned to the Diocese in 1991 and was given temporary appointments; the first was for 6 months at St Patrick’s Stockton and for eleven weeks at St Aidan’s Ashington. In 1992 I was appointed Parish priest of St Mary’s Newton Acliffe, where I remained until 2000. In 2001 I was again given two short appointments, the first at Our Lady Immaculate, Washington and then Ss Peter & Paul’s Stockton. In 2002 I was appointed parish priest of St Cuthbert North Shields until 2006 when I was asked to care for two parishes, St Joseph’s Highfield and Our Lady of Lourdes Chopwell. Country parish life was too slow for me, for the first time I asked the bishop for a move back into town ministry. In 2007 he appointed me to St Bede’s and Holy Rosary and to the South Shields, Whitburn, Boldon Cluster of parishes.

Cluster Vision
My vision for the future of the cluster parishes of South Shields, Whitburn and Boldon is to have a united Catholic community, made up of all the parishes, working in partnership to support growth in faith and Christian witness here in this part of South Tyneside.
google-site-verification: google2163923776e94aff