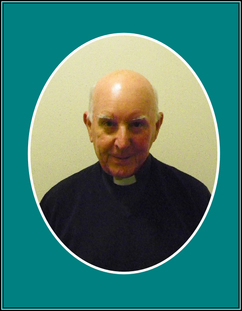 
Life Journey
I was born in Stockton-On-Tees being the oldest of four children. I have one brother who is also a priest in our deanery. After my primary education I proceeded to go onto Ushaw College from September 1950 - July 1963 where, in the same year, I was ordained. Directly after, I was appointed a curate at St. Joseph's Murton from 1963 - February 1965. From there, I went onto my next post at St. Francis of Assisi in Walkergate. There, I was introduced to hospital, school and territorial chaplaincy work. This allowed me to venture out to new communities and preach the Gospel in many different ways.

In 1971 I was then moved to St. Bede's Bedlington where I worked within the parish but, I also carried on my chaplaincy work in schools but I began to get a taste of industrial chaplaincy. Then, after 8 great years I was given a post at St. Cuthbert's in Durham in 1979. My work was divided between St. Leonard's school and the internationally known Durham Prison. This allowed me to gain a different insight into the place of God in the hearts of those in prison and their family members. A few years later I was appointed as parish priest at St. Bede's Jarrow in October 1980 and served as the Dean. After leaving St. Bede's in 1993, I went to St. Aidan's Willington Quay until 2003 when I was appointed to the South Shields Cluster.

My current responsibilities include being the Dean and a member of the council of priests.

In my spare time I enjoy reading, watching and occasionally participating in any team sports, watching athletics on television and keeping up-to-date with all current affairs.

Cluster Vision
My vision for the cluster parishes of South Shields, Whitburn & Boldon is to see the laity take responsibility for all administration. There would be an ongoing policy of formation for people and priests together, so that people would feel confident to participate in all programmes for sacramental preparation and, feel involved in all pastoral initiatives. Furthermore, I would also like the parishioners to be independent of the clergy in the sense that they do not depend on the priests for every decision. I hope that the Bishop's vision for spirituality will be strongly felt in the cluster.

I do hope that the project 'Forward Togeher in Hope', will lead us to a more serious pray life, a desire to grow in faith and a responsibility to enrich the lives of people in need.
google-site-verification: google2163923776e94aff